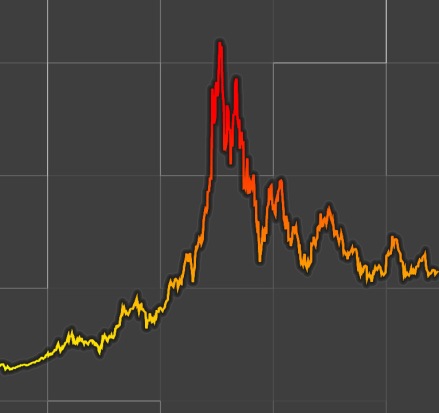 A financial bubble is:

Bitcoin fits this definition. Since you can’t spend it at every local business, use it to pay your taxes, and your landlord probably doesn’t accept it for rent (yet), bitcoin effectively has very little use for the average person, and therefore low intrinsic value. When it’s valuation skyrockets (like it did at the end of 2017), this is known as speculation, which is defined as:

“the purchase of an asset (a commodity, goods, or real estate) with the hope that it will become more valuable in the near future”

But, if bitcoin were widely accepted, it would have a ton of value, the ability to exchange money with anyone anywhere. And, I think people are largely missing the fervor that is going on behind the scenes.

Every financial institution is looking at ways to make money off bitcoin. If you watch financial media, outlets now have entire segments devoted to crypto currencies. Across the globe banks, governments, and thousands of businesses and startups are all trying to figure out how to take advantage of this new tech. One payment processor plans to ship 100,000 POS units to facilitate crypto payments in businesses globally.

We are getting close to having a turn-key solution for businesses and individuals to use and accept bitcoin and other crypto currencies. For example, I could set your business up to accept NANO (another crypto currency) in less than 5 minutes, by downloading a wallet, writing down your seed, and visiting a web page that is already a free POS app. Provided you have a spare smartphone, tablet, or PC, this is at zero cost. This is trivial to do for bitcoin or any crypto.

One component is missing though…

The mainstream does not understand new technology. Have a look at their impression of the internet in 1994:

“The internet is a computer billboard.”

They fail to see all the potential; I was ten years old when this aired and I could have given you a much better answer than that.

Every year bitcoin doesn’t die. Every year the volatility declines. Every time, the price crashes to a higher price than it’s previous high. Every transaction for airline tickets at cheapair.com, electronics at newegg, home goods from overstock.com, games and apps from Microsoft, restaurants, millions in charitable donations, and more, legitimizes bitcoin and proves that the public perception is missing the big picture.

Bitcoin is a Bubble, Until it isn’t.

Sure, the usability could use a little refinement, but we know the fundamentals work. One of these days we are going to look around and see bitcoin accepted at as many places as apple-pay or paypal. This is where the network effect takes hold and propels the utility of bitcoin exponentially, because more and more people will be able to send money around the world to anyone at any time. At that point we’re not speculating anymore, the bubble isn’t a bubble, and bitcoin works like any other money or payment we use today.